On 8 December 2021, the European Parliament Renew Europe group, with the support of the European Disability Forum (EDF), held a discussion on ensuring rights of persons with disabilities as consumers of digital services and platforms through the Digital Services Act (DSA).

The online event gathered EU legislators, legal experts, and representatives of industry and organizations of person with disabilities, to share their views on ensuring a strong digital regulation for the benefit of all members of society.

The discussion started with opening remarks by Dita Charanzová, Member of the European Parliament, who hosted the event, and Humberto Insolera, Member of the Executive Committee of European Disability Forum.

As Vice President of the European Parliament and Renew Europe shadow rapporteur on the DSA, Ms Charanzová informed the participants that ensuring accessibility of digital platforms and services in the European Parliament’s position on the DSA received overwhelming support by political groups. However, she warned that the Parliament’s decision is half of the game and now we need to ensure that the Council understands the importance of protecting rights of persons with disabilities as well. She saw the day’s discussion as a tool to send a clear message that accessibility is important for the European Parliament and that the Parliament will fight for it in the trialogues. “DSA gives us unique opportunity to move accessibility forward again. We must push Member States to step up their efforts and do more”, she said. MEP Charazonvá recalled the importance of “not giving up” on this important aspect when negotiating with the Council. She also hoped that the European Commission will be a strong ally during the negotiations. In relation to this she recalled the good cooperation with the Commission on previous legislative files such as the Web Accessibility Directive, of which Ms Charanzová was rapporteur, and the Accessibility Act. 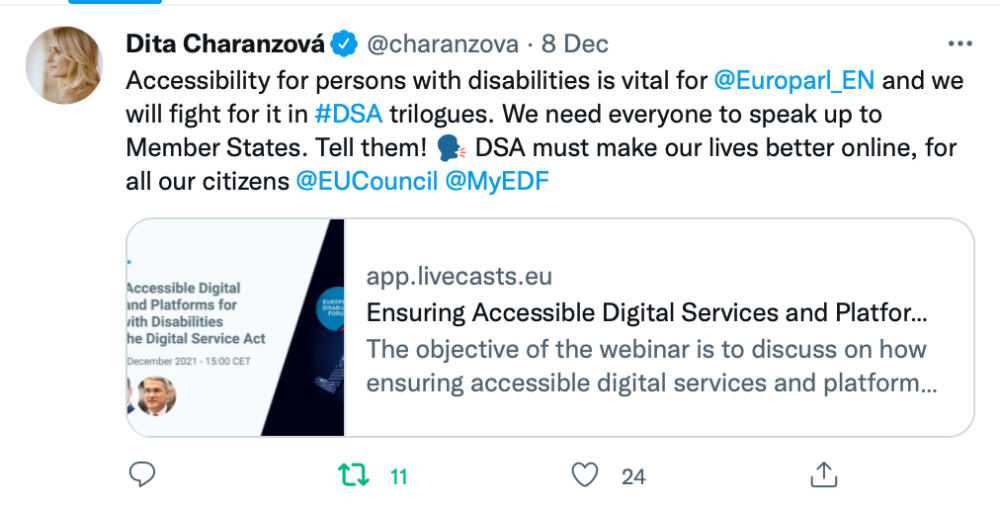 Mr Insolera continued, expressing hope that the online discussion will help highlight importance of ensuring accessibility in the DSA ahead of the coming negotiations between the European Commission, Parliament, and the Council. He reminded policymakers of EU’s and Member States’ obligations to ensure accessibility for persons with disabilities under the UN Convention on the Rights of Persons with Disabilities (CRPD). Lastly, he noted the importance of investing human and financial resources to support the legal accessibility requirements under the DSA, and making sure organizations of persons with disabilities are involved at EU and national level in the development and implementation of the law. 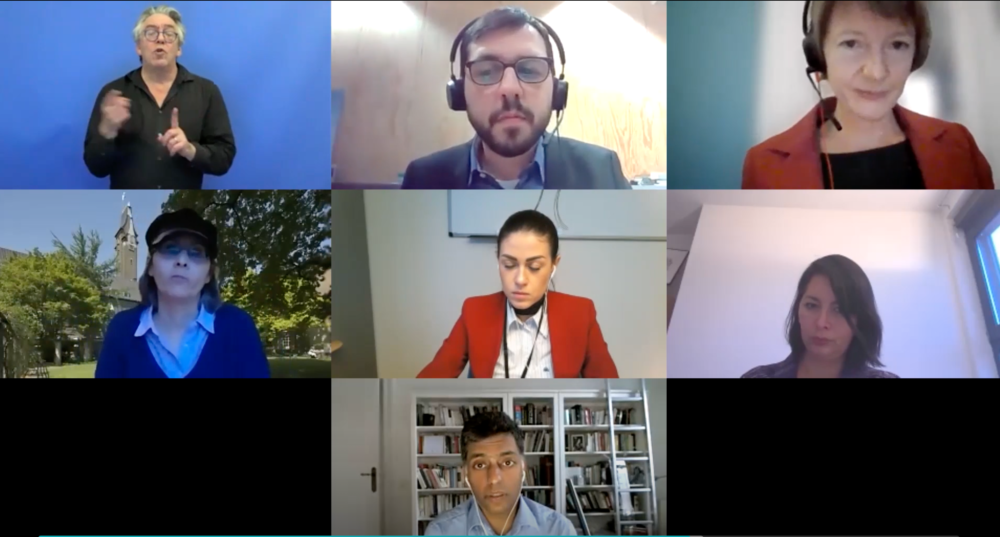 Ms Waddington presented her research which mapped European and national strategies in relation to digitalization and the inclusion of persons with disabilities, as well as disability strategies, and how they address digitalization. This set the context before the panel addressed the DSA specifically. The outcomes of the research by the European Disability Experts network (EDE) showed that the situation of persons with disabilities has received little attention in the EU and national digitalisation strategies. While the European Disability Strategy showed a broader perspective to digitalisation, at the national level digitalisation is also generally missing to disability strategies, aside from the area of website accessibility which is linked to the EU Public Sector Web Accessibility Directive. The report also showed that there is little evidence that people with disabilities or their representative organisations have been meaningfully involved in the development of strategies concerning digitalisation. The research firmly concluded that action at the EU level, and in particular the EU Public Sector Web Accessibility Directive, is driving digital transformation for people with disabilities at the national level. This showed the importance of DSA for ensuring accessibility of digital platforms and services.

Mr Agarwal then continued presenting the Digital Services Act (DSA), as one of the flagships initiatives under the current Commission mandate. First he explained the relationship between the DSA and parallel legislation called Digital Markets Act (DMA).  He noted that the DSA focuses on increasing online safety, particularly when it comes to exposure to illegal content. It also contains additional rules for large platforms on transparency and algorithms, and an innovative governance structure. While the main aim of the DSA is to protect consumers from illegal content, certain aspects of the law will also benefit persons with disabilities. These are for example provisions that aim to tackle discriminatory practices. He noted that the European Commission was careful not to duplicate regulating services and platforms which would already be covered by the European Accessibility Act.

The third speaker Mr Saliba reflected on how the DSA can be further improved to ensure rights of consumers with disabilities, including their equal access to digital platforms and services. He noted that accessibility should be centered and directly addressed in the DSA, and that we should move away from the principle of voluntary commitments to a regulatory approach. Lack of accessibility results in direct barriers for persons with disabilities and infringement on their basic rights, such as the right to work. Unfortunately, millions of persons with disabilities are still facing exclusion from digital participation in Europe. He finally highlighted the importance of consistency and reference with existing EU law on accessibility (notably the Accessibility Act) and the UN human rights framework (CRPD), which he included as part of his proposed amendments to the Parliament’s position on the DSA. 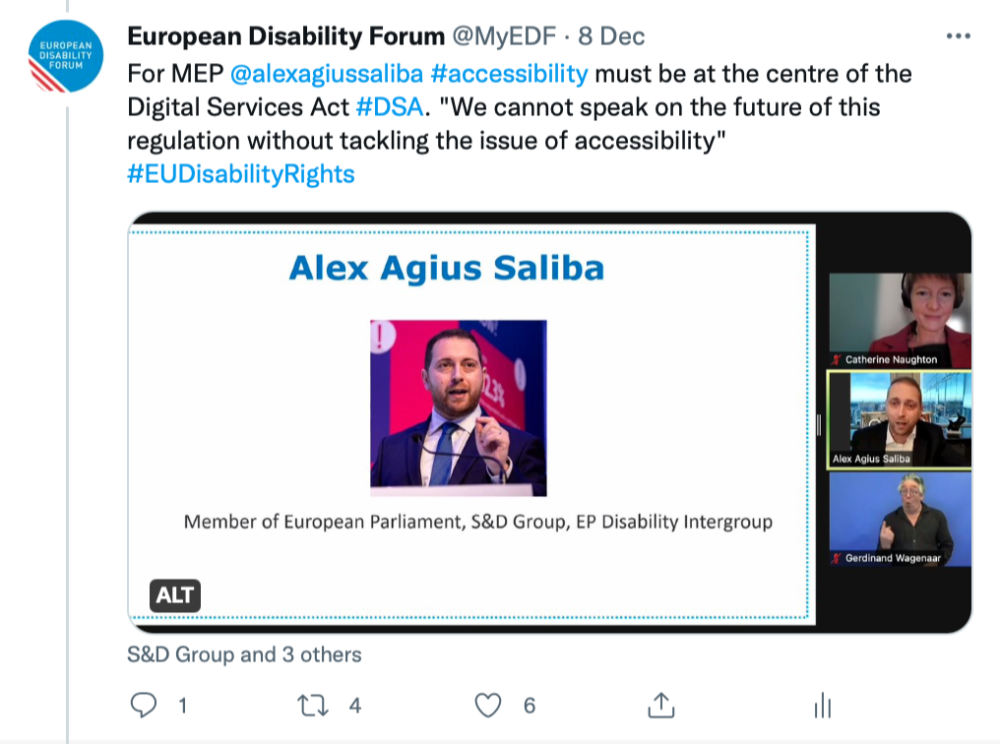 Ms Garcia- Hoogstraten continued, as representative of industry, and presented Microsoft’s position on the Digital Services Act. She noted Microsoft’s commitment to make accessibility a key priority in designing products and services and highlighted the importance of including accessibility early in the process through Inclusive Design. Microsoft supports the DSA’s horizontal approach, aiming at achieving a safe, trusted, and accessible online environment for everyone. “Microsoft believes that providers of digital services have a responsibility to design and operate the services in ways to help protect but also empower users online,” she said. Finally, Ms Hoogstraten shared about Microsoft’s good practice of involving members of the disability community for co-creating products like Microsoft’s Surface Adaptive Kit, which are accessible by design, through the Inclusive Tech Lab.

Mr Pîslaru noted that in an era of digitalization, lack of accessibility leads to major restrictions in relation to autonomy and social participation. To counter this we need to ensure that obligations under the CRPD and EU Pillar of Social Rights are respected. It is important that rights of persons with disabilities are taken into account by design, allowing everyone full access and participation in the digital transition. He pointed to the achievements made by the Web Accessibility Directive, the European Accessibility Act, and the European Disability Rights Strategy, which should be further translated to the online sphere through the Digital Services Act. This will foster innovations and growth, at the same time protecting fundamental rights and freedom of expression in an open and safe digital space. To achieve success, we must ensure an intersectional approach and involvement all stakeholders in the process of the digital transition through the DSA. “Social inclusion doesn’t only mean offering a final product aiming to assist persons with disabilities but to facilitate their inclusion and participation in the development of these products and services, and making sure their rights and needs as taken into account by design,” he highlighted.

Mr Pîslaru thanked everyone who supports making advancements in accessibility possible, and EDF for pushing this agenda forward.

June 29, 2022 | Accessibility, transport
EU transport policies and persons with disabilities – what is new in 2022?

Transport is one of the shared competences of the European Union, which means it has the right to...

On 21 June 2022, we co-organised an event on how COVID-19 recovery funds can promote a more inclusive...

The European Accessibility Summit held its second edition in a hybrid event with the participation of speakers from...