Andrii
CBM has committed 2.1 million euros in humanitarian assistance to support Ukraine and neighboring countries. Through a collaboration with the European Disability Forum and member organizations, such as SUSTENTO we aim to improve the situation of persons with disabilities.
On February 24th 2022, Russia launched a wide-range attack against Ukraine, resulting in a mass exodus of people fleeing and seeking refuge in host countries throughout the European Union.

The European Union granted residence and working rights to support Ukrainians in their resettlement process. With this, many companies rushed forward with Job opportunities to help those displaced settle quickly, one of which being Schneider Electric.

Knowing of the company’s aim to help resettle Ukrainian refugees coming to Latvia, SUSTENTO reached out to the company inquiring about the possibilities for persons with disabilities.

As part of the EDF Ukraine programme funded by CBM, SUSTENTO aims to support Ukrainian Refugees with disabilities with their registrations to work and finding employment opportunities, as many with disabilities often face barriers in finding accessible workplaces.

Wanting to make their work accessible to everyone, Schneider Electric adapted their new production lines following accessibility needs and welcomed Andrii as one of the first wheelchair users.

In the middle of March, Andrii and his wife were forced to flee their home in Dnipro. Both wheelchair users, the pair boarded a train to Poland, where they were later taken by volunteers to the Latvian Samaritan Association’s social centre in Riga, Latvia.

Though the EDF Ukraine programme funded by CBM, SUSTENTO provided Andrii with a wheelchair and connected him with Schneider Electric. Also, SUSTENTO staff went with him to the initial stage of the interview to see the possible place of his future job.

In Dnipro, Andrii once worked as a repairman for domestic devices, and was excited to be able to work again in any capacity.

Today, Andrii works as a technician who reworks products with quality issues and plans to bring the skill sets that he acquired from this job home, to Ukraine. 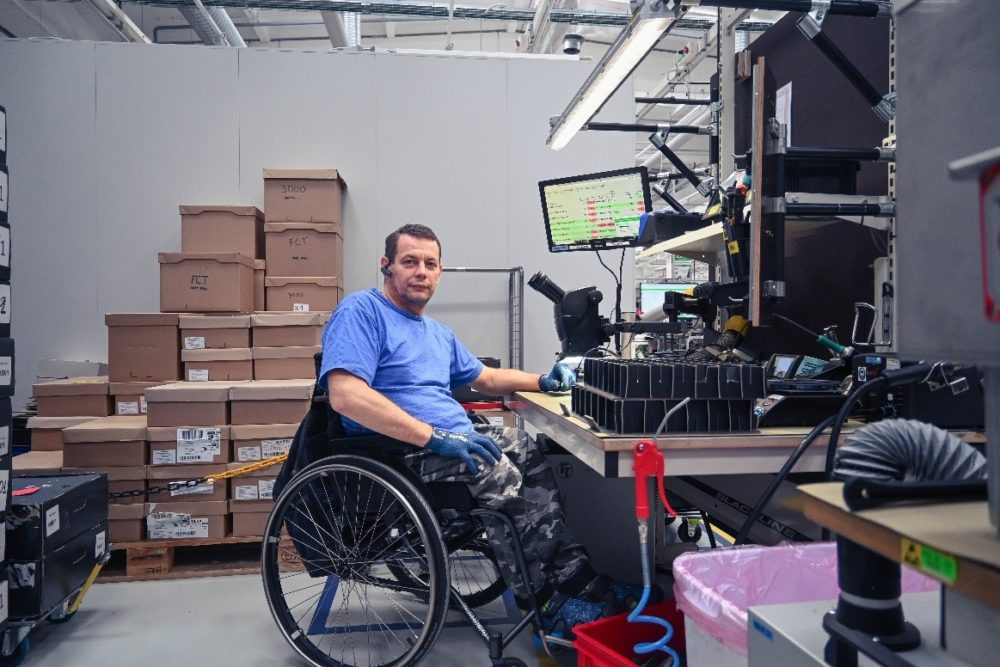 This testimonial was collected by CBM. Credits for the picture go to CBM.